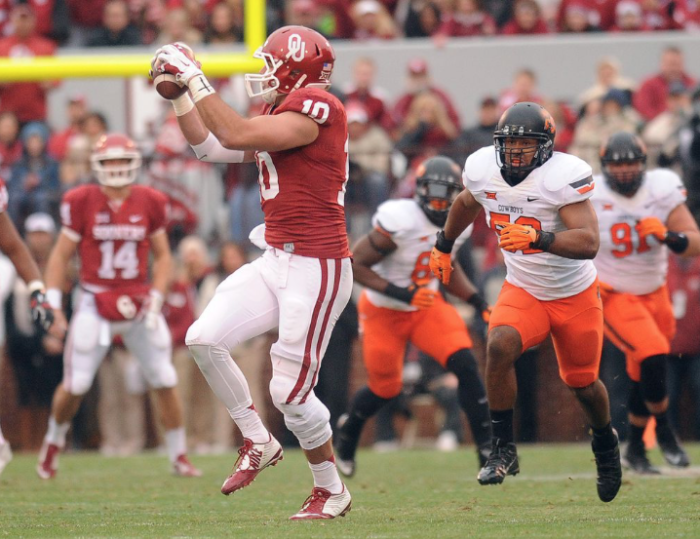 If I had told you that Delanie Walker had fantasy potential way back when he was 28 years old, you’d probably have told me to give you some of what I was smoking.  Yet, just a few years later, it was common knowledge.  Everybody knows Delanie’s a player.  In fact, most folks who actually watch football for the sake of watching football knew Delanie was a damn good player years before his statistical breakout.  He was one of those grinders who gave his team what it needed when it needed it.  He’d have made a great Bill Belichick player, but that’s for another article.  For the purposes of today’s discussion, I want to talk a bit about how a player can be around for awhile and breakout for fantasy at an older age.

The reason I’m using Walker as a comp is because he plays the same position as today’s prospect in question, but we’ve seen this happen at other positions as well.  Think Doug Baldwin.  Think Damien Williams.  Think Rich Gannon if you’re an old geezer like myself.

What most of these late breakouts share is something that delayed liftoff despite them having the requisite talent.  These things include but are not limited to things like injury, a position change, a role that limits stats or a scheme that limits the position or role that a given player plays.

In Walker’s case, he’d been cast as a jack of all trades but when Jim Harbaugh took over, Walker’s skill set was on display in a bunch of nationally televised playoff games.  Teams saw how valuable a player he was.  The Titans, in a move reminiscent of Belichick snatching Wes Welker away from Miami, saw a tight end who could be a volume weapon in the pass game.  Thusly, at age 29, Walker hit the fantasy map with a bang.  The rest is history in fantasy circles.  So the question is, as I’ve sort of alluded to, how do we see guys like Walker in advance?  My answer is that we have to know the players’ capabilities in a vacuum to understand how they might be applied in various situations or schemes.

This brings me to Blake Bell.

Still reading?  Good.  Yes, Bell is about as unexciting as it gets from a fantasy perspective, but isn’t that sort of the point?

Bell was a quarterback when he arrived at Oklahoma back in 2010—a season he redshirted.  In 2011, he was the backup quarterback behind Landry Jones, but the coaching staff liked Bell’s moxie and athleticism enough to get him on the field as a hybrid player in an h-back fullback kind of role.  In 2014, Bell converted to tight end full time.  In 2015, Bell was drafted in the fourth round by the 49ers.  Bell hung onto a roster spot over two seasons—through the Jim Tomsula and Chip Kelly disasters, before losing his spot to George Kittle (among others) when Kyle Shanahan took over.  He was claimed off waivers by the Vikings but was waived after suffering a shoulder injury.  He then lands in Jacksonville where he heals up and makes a small contribution in 2018.

On April 2nd, Bell signed with the Chiefs.  The Chiefs.

If you go back and re-read the above paragraph, you can confirm that this a whole new world for Bell.  He is finally in a scheme where his exhibited talents will be put to good use while also giving him a chance to show off some of the things he can do as a receiver.  At 6’6″ and 252 pounds, Bell ran a 4.80 forty at the combine and crushed his 3-cone drill.  He also rushed for 24 touchdowns at Oklahoma while catching four.  This is a player where there’s some hidden stuff that was not exposed given the nature of what’s been asked of him in his prior NFL stops.

Now he’s with Andy Reid—a coach who uses the entire field and every skill that every player on his team possesses.  Don’t be shocked if Reid finds more in Bell’s game than Mike Zimmer, Doug Marrone or Jim Tomsula did.  I mean let’s be honest.  None of these men are paragons of NFL offense, and Zimmer seems to wish that offense wasn’t played at all.  I kid.  I kid.

So I’ve spent almost 700 words on Blake Bell and you’re probably still less than convinced, which bring us back to the original dilemma.  These late breakouts are very tough to see in advance to any predictable degree—unless you really open your mind a bit.  This is because we have data telling us that the player is just x.  If you have trouble getting past that, it’s ok.  You don’t need to hit on every Delanie Walker or Doug Baldwin to be a dynasty winner.  Yet, for those of us willing to grind and dig, it sure is nice when you strike gold.

When it comes to rostering long-shot types, the trick is knowing where and perhaps just as importantly, when to strike.  In this case, the where is Blake Bell.  The when runs from right now (Yes, I actually have a single Bell share as we speak) to 2020 to 2021 to, well, never.  I say this not only because we don’t know if Bell can actually get it done, but because Travis Kelce is about as immovable as a projected starter can get.  That being said, Kelce is getting older (turns 30 in October) and is coming off of an ankle surgery.  Kelce also has a microfracture procedure in his past.  Point being that this is the NFL and all players have risk.

As we speak, it’s post draft and late in the free agent game.  The Chiefs’ depth chart currently has Bell as Kelce’s backup.  If Bell was a player who had any buzz whatsoever, he’d be a trendy add due to his proximity to Patrick Mahomes and Reid’s offense.  He has no buzz.  He has made no eye-popping preseason plays like say a Rico Gathers.  He’s just a solid football player with some unexplored ability as a receiver–about to play his age 28 season.

Here’s what I’d like you to open your dynasty mind up to.  Bell can be a plus blocker and an effective ball carrier.  We can see this on his film going back to Oklahoma.  The blocking in particular has kept him on rosters.  As a Sooner, Bell flashed good hands and plus body control.  In my opinion, he’s a player who could be unlocked in this scheme because of his versatility.  Like Belichick, Reid loves players who possess a complete or deep skill set—players who open up play design rather than limit it.  Bell can be one of those guys.  My guess is that we see some of this in 2019.  To see a lot of it, something unfortunate would have to befall Kelce, and while I do not wish for that, if that door was to close, maybe we’d get to open Bell’s window.

So look at your rosters.  Do you own Kelce in a deep league?  Bell could actually be a guy to add now.  The same goes for those who play in super deep leagues or deeper tight end premium formats.  In typically structured dynasty leagues, please consider Bell as a player on our watchlist, who could become a factor quickly in certain circumstances.  I’ll try to put some finer points on Bell in the next Rotobahn Podcast.  Until then, enjoy the grind.