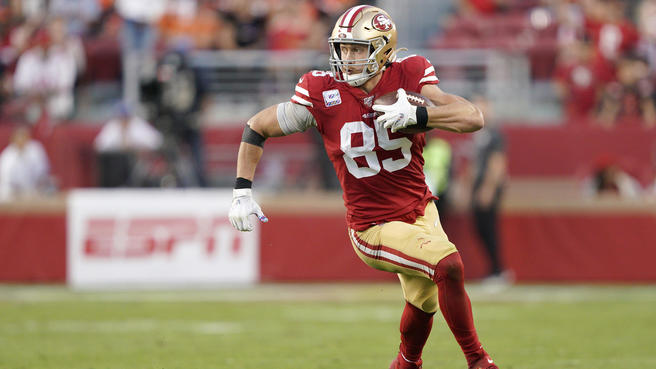 As I said last week, “It’s nice to be working a small slate for a change.”  Small slates are fun because you can see the key strategical points and players very clearly.

Last week, I told you that Michael Thomas was the best raw play on the slate, but that his level of ownership would create a situation where fading him made some sense against the field.  Well guess what, I had a lot of Thomas in my lineups, but since I faded him in about 50 percent of them, I was able to ride out his mediocre game while staying profitable.

Are there any options like Thomas on this week’s slate?  Not really.  It’s very a different set of games and prices.  Last week, we had some trustworthy low-cost options, while paying down this weekend presents more challenges.  Here are a few ideas I have that may help you with your team-building today.  And, just to be clear, I am focusing on the main four-game slate.

All pricing in this article was sourced from DraftKings.

This is probably the toughest choice to make this week.  I’m targeting Lamar Jackson at $8,400, but so far, my lineup construction has shown me that, while I want Lamar badly, his elevated price tag creates some legitimate challenges.  As I said with Jimmy Hackett yesterday, when we walked through the slate on the Off Day Podcast, it’s a week where you really can’t have everything you want.  You’ll have to make some tough choices.

So, if you grind and grind and just can get happy with a Lamar-led lineup, there are options, and they almost all have merit.

Mahomes is a fabulous play and he saves you 900 units.  He’s an easy drop down (price-wise), but you’ll still have some tough choices to make.  Going one more level down to the Wilsons, Rodgers and Watsons of the world will liberate you enough to get close to a full-feeling lineup–with a solid defense and no sub 4,500 unit receivers.

So, if we opt to pay down, which guy do we want?  Personally, I’d be on Wilson or Rodgers because I like their game environment and weapons just a bit better.  If Will Fuller (groin, hamstring) was 100 percent healthy for the Texans, I would want significant exposure to Watson, but with Fuller ailing (to some degree) and potentially playing a decoy role, I’m opting to fade the Texans on the whole.  For what it’s worth, this is probably the riskiest part of my Division Round strategy.

Now there is one more level you can pay down to, and in GPPs (tournaments), I think there’s reason to consider these guys.  My focus is primarily on Garoppolo and to a lesser extent, Cousins.  Tannehill’s matchup is a fade for me in that it’s a tough place to throw, and they will try to slow the game down with Derrick Henry.

With all that said, my expected QB exposure on this slate will look roughly like this.

I may end up shifting some shares from Jackson to Mahomes, but this is a pretty good estimation of where I will be come lineup lock.

How Do We Stack This Week?

As we know, stacking is important because it effectively synchronizes your lineup.  When a QB goes off, the odds of his pass game weapons going off greatly increases–so once we commit to a passer, it’s strategically sound to roster one or more of his weapons.

When building around Jackson, you have the most options, because he is the one quarterback on this slate who you can play “naked” or without any stacking options.  This can work because Jackson, unlike the rest of the field, can go off in a big way, without throwing multiple touchdown passes.  When opting to stack Jackson, the choices are pretty solid, because his target distribution is fairly thin.  When Mark Andrews ($5,600) and Marquise Brown ($4,400) are healthy, they tend to garner the big plays.  If I am stacking Jackson, these two will be my focus.

Mahomes is easy to stack in a sense, but because the Chiefs are so explosive and have so many weapons, there is a strong FOMO (fear of missing out) vibe.  One potential solution is to stack multiple options and another is to create multiple Mahomes lineups, as I plan to do.  I want separate stacks with Tyreek Hill ($7,600), Travis Kelce ($6,400) and also Damien Williams ($6,000), and I also want a few combo stacks where I blend them.  You could also go off the board a bit (best to do so in a large field GPP) with this offense.  If taking a long shot appeals to you, Mecole Hardman makes the most sense to me, at a cost of 4,100 units.

If you are building around Wilson, both DK Metcalf ($6,800) and Tyler Lockett ($6,600) make sense, though Lockett will almost assuredly be the lesser owned of the two.  If Rodgers is your choice, then Davante Adams at $7,800 is the easy call, but you should also consider Alan Lazard–a potential value at $4,500.  The obvious stack with Garoppolo is George Kittle at $6,200–one of my favorite players this week at any position.

He’s high risk because the matchup is a tough one, but you are getting a ton of upside at a very depressed cost.

Deebo has been heavily involved in the game plan both as a receiver and a runner.  It would be a shock if they went away from him in a big game.  He’s been making big plays with great consistency.  I’ll have some exposure this week as an alternative to Kittle, or as part of a larger game stack

This one is tricky but with the way Mark Ingram’s calf is shaping up (limited in Friday’s practice), and given that the Ravens intend on playing this week and next, I can see them being careful with their starter.  That would mean more Gus, so consider getting on the bus.  Even if the Ravens decide to let Ingram go full, the risk of injury is high enough to roster some Edwards.  He saves you money and gives you some sneaky ceiling.  Think about it.  They are favored by almost 10 points.  If the Vegas line holds, they will be running late, and that will almost assuredly be Edwards’ job.  I plan on having 20-30 percent exposure.

Some Final Notes On Strategy

I did not get deep into the runners, but the obvious plays are all good ones.

Mix and match to fit under your cap and into the stacks you are using on a lineup-by-lineup basis.  It’s worth noting at this point, that a large portion of my builds this week have been asymmetrical–in that I am foregoing the usual third RB in my flex spot.  It’s largely due to the cost of the backs I want to play but it’s also due to the strength of the top three tight ends relative to cost.

So it’s a good week to be more flexible with your flex spot.  Using three backs is fine, but I’d suggest keeping all of your options open.  I’m also pretty well committed to using at least one of the Seahawks receivers in all lineups and I want a Green Bay receiver as well, if I can swing it.  That last game on the slate (Seattle at Green Bay) has the best combination of good pricing, and a game script that leans to the pass.

Lastly, please remember to play within your comfort level.  You can have loads of fun playing DFS without spending more than a few bucks a week, so play responsibly.

See you all next week!