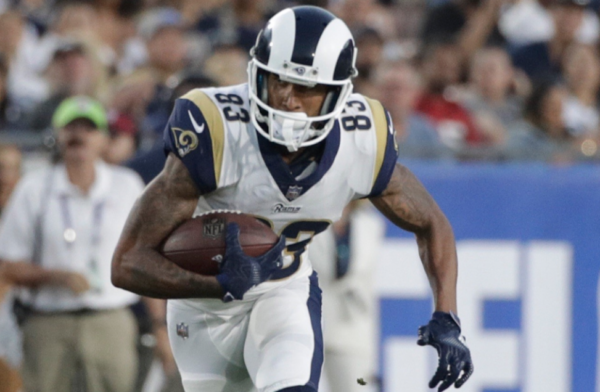 Week 11 is here, and we have a whopping six teams on their bye weeks. That will lead to a feverishly competitive free agent market, especially if your league’s standings are tightly packed, like most of mine are.

Sorry for the delay with getting this up on the site.  I was recording a pod with the great Sigmund Bloom.  I’ll post a link when the show gets posted.

I’ll have a few updates to this article between now and 7pm.

Fitzpatrick is available in more than 30 percent of Yahoo leagues, so take a look just in case. The Bucs’ pass volume is locked in every week. Mariota has a nice matchup this week and is now on a bit of a roll. As I have been saying for weeks, when the hand (and elbow) fully heals we’ll see a different player. That seems to have happened. He has a few good matchups going forward. Prescott is highly mediocre until you add in his foot-points. He’s had rushing scores in two out of the last three games and  his playoff schedule is tasty. Mayfield gets the Bengals twice the rest of the way. Jackson is a wonderful stash option and could be played this week if he starts. This is a player who can score 20 points with his feet alone on a given week. With Joe Flacco’s hip concerns, Jackson is now a viable free agent target. Mullens is a guy to keep an eye on as he draws the Bucs in Week 12, after the 49ers’ bye. Rosen is not worth much the rest of the way, but the Cardinals host the Raiders this week, so he has some short term appeal.

Martin may not be fun or sexy but he’s got a solid early down gig and he’s catching a few passes too. His schedule is favorable and he’ll get you something each week. Penny is the shiny object this week because he broke off a long run on Sunday. While he’s a great add for his ceiling, he’s still mired in a three back committee. He’d be a shaky flex play this week assuming Chris Carson returns from his hip injury. McGuire has quietly led the Jet backfield since his Week 9 return. He’s played significantly more snaps than Isiah Crowell and he’s getting work, particularly as a receiver. If a significant PPR ceiling is what you’re after this week, McGuire is probably the guy to go get, and he’s widely available. Adams has looked very good as an early down runner, and a goal line role seems likely going forward. He should be rostered in most leagues and certainly all standard scoring leagues. The coaching staff has indicated his role will grow if his strong running continues.

To me, with Cooper Kupp gone for 2018 (pour one out for my guy), Reynolds is the choice for top priority. You all know I’ve been pimping Miller for months, and he’s finally breaking out, but still, he’s one of five main weapons in an ensemble offense. Reynolds will be one of four main arteries in a better offense with a non-running quarterback. Both are great adds, but for me, Reynolds is the top option. Smith is coming off a big old bagel against the Bengals, but he’s pretty well locked in as the second receiver in Big Easy and that’s all I need to know. He’ll have big games and some duds, but he’s a borderline WR3 every week. Ross will now have a chance to shine. He played 84 percent of the Week 10 snaps and that’s going to continue. He should have some big games in his future, if he can stay healthy, which is a big if. Westbrook is getting steady targets. Granted, they are Blake Bortles-thrown targets, but still—he’ll get you a handful of PPR points every week. Tyrell Williams has taken over the second receiver gig for the Chargers—doubling Mike Williams’ playing time over the last two weeks. He’s a bit hit-and-miss, but the hits should be more frequent at his current usage level, which I suspect will continue. Coutee is back from his bye week and should be a nice flex option in PPR leagues the rest of the way. The only concern is his hamstring, but that should be cleared up sooner rather than later. My guess is that he plays this week.

McDonald’s role is a bit unsteady but he makes plays with enough regularity where he’s a decent starter on most weeks for teams in need of help. Seals-Jones is seeing more looks and I like the new Byron Leftwich coached offense much more than what we saw with Mike McCoy running the show. Heuerman is back off of his bye week and he’s been heavily involved—particularly in the red zone. He could turn into a weekly starter if the trends hold the rest of the way. Vannett sees inconsistent usage but he’s playing more than Ed Dickson and has scored two straight weeks. Jonnu Smith is finally seeing some targets and has made big plays in back-to-back weeks. He should be rostered in large formats. Herndon keeps increasing his share of the playing time and he gets his quarterback (Sam Darnold) back this week. Hurst is coming off the bye and has a nice schedule the rest fo the way. He saw more playing time before the bye and is one step away from being a viable starter. Stash him in large leagues. He’s got serious receiving ability.