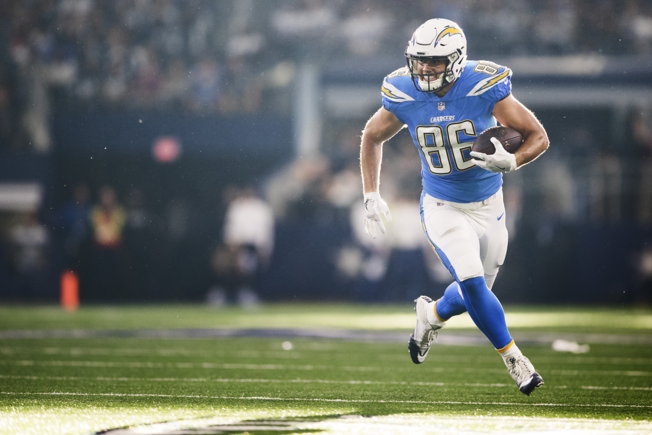 We’ve now passed the midpoint of the fantasy regular season.  There are only six games left to lock in a playoff spot!

We’re now into the bye weeks, which alters our perspective somewhat when it comes to waiver adds—balancing rest-of-the-season wants with immediate roster needs.

I’ll be back at around 4pm with some more players.

The Browns, Steelers, Bucs and Panthers are on their byes this week.

Unless specified, all players in this article are owned at a less than 50 percent rate on Yahoo.

He was dropped by some folks while he was on his bye and I’d suggest scooping him up if you can.   He was a nice matchup with the Dolphins this week and really has a solid fantasy schedule the rest of the way.

He looked very good in his Week 6 return—beating the Cowboys and reestablishing the Jets offense as a professional operation.  Darnold is a solid add, but his value is more for the rest of the season than his matchup with the Patriots defense this week.

He’s largely available so give a look because the Giants have plenty of favorable matchups on their remaining schedule.  Jones will give you some foot-points and he’s got the weaponry you need to post some passing stats.

Brissett plays the Texans at home this week, and I’ll take that matchup.  The ex-Patriot has been a solid option so far this season.  If they can slowly add more downfield shots to his repertoire, they may have themselves a long term option.  For us fantasy players, Jacoby is a short term play for this season.  As I have said a few times, I really like the Colts closing schedule.  Brissett is a solid buy not just for Week 7, but for the rest of the way.

Look, I’d prefer to not write this one, because, like many fantasy players, I want to see Aaron Jones getting a big share, because he’s a big talent.  The problem is, the Packers’ head coach, Matt LaFleur, seems intent on a 2-man backfield.  Last night, in a game where Jones made some key mistakes, his team went away from him and increased Williams role to the point where he out-snapped Jones.  According to Adam Levitan, Williams played three more snaps than Jones and out-touched Jones by three.  In the process, he had a big game, with over 100 yards rushing and a touchdown through the air.  Williams may not be sexy, but he’s scoring points on most weeks and he’s not going away.

It sounds like he should return this week and there appears to be a role waiting for him in that nobody else has really made a case for themselves as the early down back. Burkhead matches up quite well against the Jets because he can uncover quickly against linebackers.

He had a single carry for a single yard going into Week 6, but the rookie had a nice day as both he and Malcolm Brown carried the load for the injured Todd Gurley.  Henderson is an add in all leagues (assuming adequate bench space) as he may have earned himself a change of pace role going forward.  May have.  We’re still trying to read the tea leaves here.  His Week 7 value may be tied to Gurley’s health, so pay attention to any updates that come out throughout today and early tomorrow—depending on when your league runs its waivers.  The Rams have slow rolled Henderson this season, but they also traded up to land him on draft day, so he’s a player they’d like to get going.  He’s now arguably a more valuable player than Malcom Brown on a stand-alone basis—meaning he could become the change-of-pace back when Gurley is healthy.  We’ll just have to keep watching to find out.  For now, all of the Rams’ backs should be rostered in 12-team leagues.

Mattison is one of the top five handcuff options out there and the reasons for this are obvious.  First, he has a three down skill set which means he’ll be a factor no matter how the game flow progresses on a given week.  Two, his team runs the ball a freaking ton.  Three, he backs up Dalvin Cook, whose ferocity as a runner is only outpaced by his fragility.  That’s probably a bit strong, but we know Cook has had trouble staying healthy.  If you are a Cook team, you must, must roster Mattisson if you can.  For those who don’t have Cook, I’d roster this guy as a stash, but you also get some stand-alone appeal as Mattison had 14 carries in Week 6 with a healthy Cook.

Alvin Kamara was a game time decision in Week 6 after spraining his ankle in practice.  Kamara then missed some in-game time with a sore knee.  This makes Murray a decent speculative add just in case Kamara misses time.  If you are a Kamara team, you should consider adding Murray preemptively.  This week’s clash with the Bears makes for a mediocre projection, but next week’s matchup at home versus the fast-paced Cardinals is pretty sweet.

Edmonds did not get the start we’d hoped for last week, but he was still given 7 touches and he scored in a reserve role.  This reminds us that he has some stand-alone appeal in this fast-paced offense.  Of course his main source of value is as a handcuff for David Johnson, and, since Johnson has already had a few bumps along the way (most recently a bad back), rostering Edmonds has never made more sense.

He’s not the next coming, but in a backfield where they seem to dislike all of the other players, Walton’s broad skill set could be a source of fantasy production for those who roll in large leagues or for those who have bye week troubles.  His Week 7 matchup with Buffalo is a tough one but the projected game script leans to the pass game, which is good.  Walton played 32 offensive snaps in Week 6—a season high.

The bye week sort of kills Snell’s appeal in that he was getting some touches behind a banged up James Conner while Jaylen Samuels is out. Conner should heal up and Samuels eventual return takes the top off of Snell’s handcuff value. Still, in deep leagues, he might be a solid add. You’ll just need a few things to break right for you.

He’s still available in about 40% of Yahoo leagues, so make sure you check for him.  Anderson and Sam Darnold should now be hooking up on a regular basis.  The Jets’ schedule lightens up nicely after this week’s matchup with the Patriots.

Crowder is even more widely available than Anderson and in full PPR scoring leagues, he may have similar value.  Crowder has already shown good rapport with Sam Darnold and he will be a solid weekly starter going forward for as long as his health lasts.   Add him in all full PPR leagues and even larger standard ones.

He’s the 49ers receiver to add right now based on playing time (led WRs in snaps over last two games) and game involvement.  You also have Deebo Samuel (groin) banged up.  Pettis is healthy now and the 49ers are past their bye week.  As I’ve mentioned several times, they have a nice stretch of plus matcups after their bye, and it’s time to start cashing in.  The playoff mtchups are not too bad either.  Marquise Goodwin is also a viable flex play, especially in Deebo misses time.

A.J. Green will return at some point—perhaps some point soon, but be careful about assumptions here.  The Bengals use three receivers almost as a base set, so Tate should remain a viable weekly piece until John Ross returns, and that’s well over a month away.  Tate amassed 12 targets last week and if a few more were anywhere near their target, he could have caught ten balls.  He made several circus catches that were in the Brandon Lloyd realm.

The Patriots really need Dorsett to get healthy and it sounds like that could be this week.  With Josh Gordon banged up, Dorsett is the main deep threat.  He’s a nice add this week with N’Keal Harry still at least two weeks away.  Dorsett was dropped in a lot of leagues last week, so check his status.

If the injuries to Davante Adams and Geronimo Allison persist, then Lazard could be a thing.  He made a bigger impact than Jake Kumerow in Week 6, and he flashed the kind of ball skills that Aaron Rodgers can maximize.  I see a future here.  Lazard is available virtually everywhere—even in dynasty leagues.  He could be Green Bay’s version of Auden Tate, but working with Aaron Rodgers instead of Andy Dalton.  Rodgers talked about Lazard’s preparation habits and work ethic after the game.  He clearly has some belief in this player.  Nice sleeper!

He could actually turn into something because his best routes line up well with the routes Darek Carr throws well most often.  There is a lot of playing time and targets up for grabs in Oakland and Jones is actually a decent fit for the way they design routes.  He’s a nice deep add and a player to keep tabs on this week and next.

As I said last week, based on Week 5, Williams is the guy to target.  He would balance out the starting trio–giving them a big body to go with Smokey Brown and Cole Beasley.  Obviously we saw some really good things from Foster last year and McKenzie at times, too.  They are on now past their bye weeks, so they make nice stashes in deep formats.

If Josh Gordon can’t go this week, Meyers is a reasonable flex option against a weak Jets secondary.

I’m putting him here even though he is over 50 percent owned, just because he’s that important to check on.  As I said last week, even if you have a really good tight end, Henry can be a great trade chip or high-quality redundancy piece.

He was dropped a lot last week after his hamstring news got out, but everything we liked about him is still valid and he could return as eary as this week.  I’ll be adding him anywhere I can–just behind Henry, who obvioulsy deserves top priority after flashing full health in last week’s breakout.

RSJ has been tough to peg for much of his career and some may see his Week 6 stat line and say that he’ll never find any consistency, but the time has come to take this guy seriously—at least for the next six or so weeks while David Njoku remains out.  The big change in Week 6 was playing time.  Seals-Jones played 68 percent of the offensive snaps, which is a big step forward and that led to six targets.  Both are season highs and both bode well in terms of continued success.  The tight end position is in shreds and tatters right now, so this is a player to target in 12-team leagues.  He’s on the bye this week.

They got rid of a receiver in Zay Jones which could open up a few targets and Knox clearly has this gig nailed down now.  He’s a deep league option, but he’ll give you a chance on most weeks.  One of his big problems is that his QB is not great at throwing for scores near the stripe.  He tends to run them in instead.  That’s suboptimal for a tight end.

Normally, you’d say, “he was just cut, no thanks”, but with the patriots, you really have to keep an open mind.  They have a need at TE and he knows the scheme and the QB.  In super deep leagues, he could be a lifeboat.  He had some TD potential.