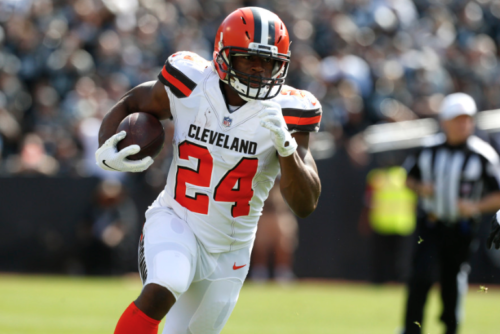 Welcome to the expanded waiver wire!

As we head into Week 7, things are getting much more defined. The great stash options are fewer and further between and most fantasy teams are searching for immediate help. This week’s wire will reflect these trends.

The Week 7 bye teams are Pittsburgh, Green Bay, Oakland and Seattle. So if you are getting hit hard this week, don’t wait to act. Get involved in tonight’s bidding and or claims.

Alright, let’s get to the Week 7 targets. Newly added players are in bold. I’ll be adding players up until 6pm so check back.

Engram was let go in some leagues due to his knee injury, but he should be back at peak performance level soon. Cohen can he had in some leagues so check his status out. Anderson is going to lead the Jets receivers the rest of the way. Go get him. Winston is still out there in nearly half of Yahoo leagues. Howard is obviously healthy now and has been dumped in far too many leagues. Clement and Wendell Smallwood need to be owned in all leagues, but Clement seems to be their preferred guy so I’d add him first. Njoku is available in one out of four leagues and he looks like he is about to break out. Love him going forward.

Mayfield visits Tampa Bay this week, followed by tilts at the Steelers and at home versus the Chiefs. That’s pretty tasty stuff. Trubisky is past his bye and has solid matchups right up until Week 11. Flacco has playable matchups most of the rest of the way. Prescott was a nightmare early on, but he has picked things up in recent weeks. Dak has a solid matchup this week with Washington, and a favorable schedule the rest of the way. There are six teams on their bye on Week 11. There will be big demand for QBs that week and Manning gets the Bucs at home. Get him now if your starter has a bye that week. Beathard has looked solid and is a functional matchup play who can be had in almost all leagues. In super deep formats and 2QB leagues, Anderson could be a find this week. He’s the likely starter with Josh Allen’s elbow injury.

Mack didn’t play a ton of snaps versus the Jets in Week 6, but he established himself as the Colts most effective early down runner, and perhaps more importantly, he showed that he’s healthy. He should have a solid share at the goal line and I suspect he’ll handle most of the early down work. He’s a great add in all leagues. I’ve been pimping Mack for a while now, so hopefully most of you already have him on board. If not, this could be your last shot. Chubb is still my favorite stash and the Browns are saying they will get him more involved. I think it’s about to happen, for what that is worth. Murray looked good last week and is an essential handcuff for Dalvin Cook, who is a good bet to return this week, but is also a good bet to get re-injured. Barber looks like he may be able to hold off rookie Ronald Jones for a while longer. Barber is playable in the Bucs’ upcoming matchups and makes an excellent add in leagues that are less than full PPR. Ito Smith gets a bump up with the news that Devonta Freeman has been placed on IR. He’s no a viable flex going forward–playing the old Tevin Coleman role. Foreman should return this week and with no clear lead guy in Houston, he could make a big impact. Of course, he could also be less than expected coming off of a serious achilles injury. Still, he’s worth a speculative add in any league where you need help at running back. Hines led the Colts backfield in snaps so still a viable option, especially in deeper PPR formats. Riddick and Sproles are pure PPR backs in leagues with 12 or more teams. Sproles (hamstring) should be back soon.

Ivory makes sense because he’s clearly the next man up and because the bills could trade McCoy prior to the deadline.  Charles is for very large formats, but I added him last week in a league that rosters 500 players and I may end up using him here or there. He played 35% of the snaps right out of the box, which is encouraging. He could have deep flex appeal if Fournette never gets healthy for more than a half, which has been the deal to date.  Montgomery is owned in most large formats, but keep an eye on him and nab him if he gets dropped. He could get a role bump soon and could become a PPR option. He’s moving very well and would make a nice 1-2 tandem with Jones in a few weeks. Penny is their guy in Seattle. He’s behind schedule, but he’s still their guy. They sunk a number one into him and he was back in the mix, albeit late in the game, in Week 6. They could flip the switch and go to him as the main guy at any time. He should be rostered in all 12-team leagues.  He’s the most talented guy they have along with the perpetually injured CJ Prosise.

Richard is getting a consistent target diet and posting about five catches a week. That’s worth something. He’s also playing 40-50% of the snaps lately. Martin has been getting scraps after Lynch, but both backs are now worth more with the news of Marshawn’s groin injury, which could extend past the Raiders’ Week 7 bye.

Goodwin is back to full health and based on Monday night’s performance, he’s found some chemistry with C.J. Beathard. He’s a high priority add and he’s the 49ers’ number one option when healthy. It’s pretty clear. Chris Godwin keeps making big plays and has a nice schedule going forward. Gabriel is hot right now and has strong weekly flex appeal. Just don’t expect consistently big volume as there are so many good options in the Chicago offense. Beasley finally has the breakout game we figured he had in him. What does it mean going forward? Hard to say, but he’s an add just in case they sustain his involvement. He has 11 targets in Week 6 and has only 13 in the three previous outings. Callaway gets Tampa this week and that could the thing that unlocks the raw rookie playmaker. Reynolds is on the wire for the second consecutive week—this time due to Cooper Kupp’s knee situation. If you lean on Kupp, you can protect yourself this week by adding him. Kearse is now healthy, and with Quincy Enunwa nursing a potential high ankle sprain, his targets should be there in the short term. As with Reynolds, Hardy makes the list as a cautionary option. With both Mohamed Sanu (hip) and Calvin Ridley (ankle) banged up, Hardy could be in for increased time in Week 7. D.J. Moore is getting closer to being a weekly flex play, but is still more of a stash option. I’d add him in all leagues with 12 or more teams.

Gallup should have made the morning wire, but WEEI has constraints on how long the article can be, so he arrives safe and sound at Rotobahn for the expanded wire. I really like him as an add.  Gallup played 81% of the Week 6 snaps–by far his best on the year. He also just missed what would have been a sweet touchdown. I see good things in the near future.  The Curious Case of Chad Williams… You can make a powerful case to not add him in deep leagues as he’s done little of note, but here’s the thing, they keep playing him major reps–and he’s very talented. It’s possible that, when this offense stabilizes in under Josh Rosen, so will Williams.  He almost had a two touchdown game back in Week 4. He’s a compelling under-the-radar player–maybe just to scout in most leagues, but a name to know.  Matthews is a stashable option. He looks like he’s not all the way there yet.  Looks like he might still be five pounds heavy after being hurt so long. I could see him stepping up if there’s an injury and his snaps could climb into the WR3 range if he keeps getting better. It’s clear that the QB likes him, and in real life they are close friends.

Pettis is a option in deep formats, but he’s a pure stash, because he may not play for another week or so. Still, he should assume a significant role when he returns and this receiving crew is perpetually banged up, so opportunity could very well be there for him target-wise. The play of Beathard has been functional enough to consider guys like Pettis, Kittle, Goodwin and Garcon going forward.  Taylor getting dropped all over BUT his playing time was at it’s highest level all year in Week 6. This is very good news. Once Mariota is throwing teh ball better, this should be a solid situation. Stash Taylor where you can. Tyrell Williams was an oversight this morning. He’s been playing a little better than his stats and obviously dropped a big one in Week 6. He’ll do that now and again, but he’s a viable flex or WR4 in deeper formats and he’s always a decent roll of the dice in any format if you are in need. Rivers likes him and Rivers is playing good ball.  The Chargers bye is Week 8 and the matchups are good overall. Sharpe is only for those in deep PPR formats, like 14-team leagues with large rosters. He’s clearly going to be one of the top three and, as with Taylor, he could pick up some steam if this offense ever gets right, and I think that happens eventually. Sutton was also an oversight. It may look like his snap count dropped, but he missed some time with an injury, but came back. He should be fine, and could become a big thing if they either switch QBs or get Case Keenum straightened out. Pascal hasn’t donemuch, but he played a ton last week and could have increased opportunity in Week 7 with so many injuries in Indy–Ryan Grant’s ankle being the latest. This is a situation for deep leaguers to keep tabs on.

Howard is the clear top target now that he’s healthy. Doyle should be back soon and will be a weekly starter immediately. The Colts offense needs his steadiness badly. Seals-Jones has some upside in an offense with no clear lead option. He’s a converted receiver, so he’s not in there to block. Hooper disappears too often but is a cog in a great offense, so he has appeal as a guy who can always start for you. Uzomah is a safe bet for mid-level production. He’s the clear lead dog for now. Swaim had a quiet Week 6, but is still dominating playing time and has shown solid play-making ability. I bumped up McDonald after combing the Steelers snaps. They are now playing tons of 2TE or 12 personnel, and I like that for McDonald going forward. With Jesse james playing more, he does more blocking which frees up McDonald to make big plays.

Heuerman isn’t sexy and he hasn’t broken out yet, but he’s got the gig pretty much sewn up in Denver, so he’s worth a look in large formats. He does have some talent. Not as much as Butt has, but a good player. Davis is a guy to keep an eye on. If Washington has as many injuries this week as they did last week, he could have a meaningful role again. He’s also great injury insurance for Jordan Reed owners.