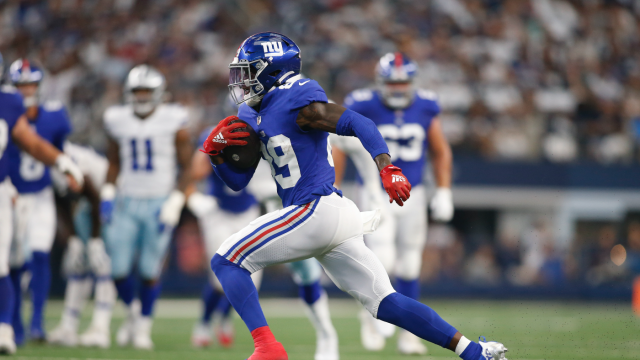 That was one ugly week. I won games I had no business winning and lost one that I thought I had in the bag. I bet a lot of you all had similar craziness.  It was a topsy turvy kind of Week 7—largely due to the byes and injuries.

The big story this week is the Eagles backfield. With Miles Sanders looking very shaky to play and potentially out multiple weeks, both Kenneth Gainwell and Boston Scott are projected to have flex appeal in Week 8.

Just like last week, we have a lot of bouncing balls to follow as we get ready for Week 8. The Giants, Packers and Dolphins all have receiver situations to watch this week.  The backfields in both Seattle and Baltimore are muddy as we move forward, though the Ravens are off this week.

I’m going to grab some dinner but I’ll be back around 9pm with a few more ideas.

Good luck to all this week!

Stash Options (in no particular order)

Regarding Watson, if it’s true that he will be able to play right away, and he gets a favorable landing spot, he’s a potentially elite option down the stretch. While it boggles my mind how any NFL Team would assume Watson’s baggage, he’s obviously a huge talent. If he could be a difference-maker in your format, he could worth adding above all others.

Drake’s off this week but he seems to be getting a better shake with Gruden gone and Josh Jacobs’ injury is another potential plus for The Drake.

Gainwell and Scott should both have bigger roles for a week or so while sanders is out.

Brandon Bolden looks good in his new role and I can’t fathom why they would go away from him as a role player because he blocks better than the rest and has always been underrated as a back.

Rashad Penny looked pretty spry to my yes and he could end up being a thing when Russ Wilson returns.

I’d be picking Toney if he was dropped. I have been really impressed with him. Thomas should be a big deal when he returns in Week 9 or thereabouts.  I thought Bateman looked good in both games considering he’s a rookie coming off fo injury. Now he could start dropping some bigger stats days, but he’s on his bye this week. Gage is back and has looked good and very much in the role he needs to be in for weekly production. He’s the third option behind two guys who both draw doubles.

Nothing too sext here but most of these guys are decent options right now. Moreau is a really good player and he will continue to produce if Waller remains out. He’s a great add for Waller teams so they are well covered.