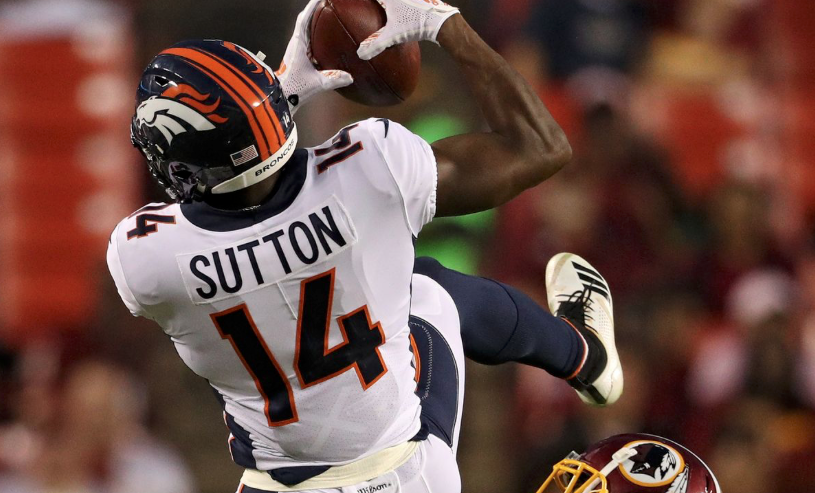 With six teams on the bye, the free agent marketplace is going to be like Walmart on Black Friday. So buckle up and get ready by checking out today’s wire. I will continue to add names and update this article as more NFL trades occur. The article will be finalized by 7pm.

If you have listened to this week’s waiver wire podcast, follow this link.

The Week 9 bye teams are the Bengals, Giants, Jaguars, Colts, Eagles and Cardinals. Alright, let’s get to the Week 9 free agent targets.

Players added since this morning’s wire over at WEEI are in bold.

They are all rostered in over 60 percent of Yahoo leagues, so they don’t really belong on the wire, but I’d check their status in your league just in case. In Green Bay, Jones has been the best runner by a solid margin. A playing time bump is imminent in my view. And now, with Ty Montgomery in Baltimore, there are more snaps available. Agholor’s downturn is temporary. He could be a hot commodity very soon and should be rostered in 100 percent of leagues. Trubisky is surrounded by playmakers and is past his bye week. He should be owned in all leagues. Fitzgerald’s ownership has been falling but he played every single snap last week and looked darn good. Add him anywhere you can, but be mindful that he is on his bye this week. Richard is a rising commodity in PPR leagues and is a solid starting option during the bye weeks and perhaps beyond.

Prescott is a dual threat option (run and pass) who has been running quite a bit this season. He’s also getting Amari Cooper into the fold this week. Dak should be a viable option going forward, with some big game potential due to his aforementioned running ability. Fitzpatrick is starting again and his stats have been there almost every time out. It’s the surrounding talent that’s making it happen, but who cares, right? Carr and Beathard (now questionable) are playing each other on Thursday night and it’s a plus matchup for both. They are short term options in my view. Mayfield is playing under new management with Hue Jackson and Todd Haley both having been ousted. That alone makes him interesting, and I like his remaining schedule—including this week’s game with the Chiefs. Flacco has appeal due to the Ravens high pass volume and favorable schedule, but this week’s matchup with Pittsburgh is just so-so. Keenum is no fun to watch, and has been wildly inconsistent, but he’s a stable commodity who is very likely to keep his job all season. Denver has no other options in the wake of Chad Kelly’s release.

Smith is locked into a job but he is what he is and having AP as the engine to the offnese does nothing to increase aggression.  Manning’s big games will be fewer than expected because the OL simply cannot support many downfield shots (it’s just beyond bad), but the talent around him will give him a floor and he’s not getting replaced in-season unless it gets a lot worse. Mariota is a stash or desperation play at present, but if his hand fully heals, he could get hot. He was rushed back and I think that’s slowed the processof getting to full health.

Will Ty Montgomery have a big role? He will if the Ravens have a clue. I think he takes most of Buck Allen’s snaps and some of Alex Collins’ in certain matchups. It may not happen this week, but I expect them to incorporate Montgomery during their bye, which is Week 10. This is a team that plays fast and attempts a lot of passes. Joe Flacco leads the NFL in attempts right now. It’s a great fit for Montgomery. Barber is now securely in the lead role due to Ronald Jones hamstring injury. The Bucs don’t block the run well at all, but he’s a good back and he should get most of the action. Martin should handle most of the goal line and early down work in Oakland with Marshawn Lynch out. Smallwood played 50 percent of the snaps and appears to be the back to roster in Philadelphia with the largest share in terms of playing time. Adams, while being a bit limited, is a strong early down runner and he looked good last week picking up 61 yards on nine carries. He’s a smart speculative add in non-PPR leagues and large formats in general. Ito Smith has a bad matchup this week (at Washington), but he’s going to have flex appeal on most weeks going forward. Booker has always been a bit underrated and he should continue to get plenty of snaps until Royce Freeman returns. Freeman has a high ankle sprain, so his odds of returning this week are not great. Hines is still a big factor in the Colts offense and had 13 touches for 85 total yards against the Raiders in Week 8. He’s very playable during the byes. McGuire is getting healthy at just the right time. The Jets need a multi purpose back with Bilal Powell out for the year. McGuire should return as early as this week and could quickly become a startable asset in 12-team leagues.

Gore is a decent low-upside flex in 12-team standard leagues. He’ll continue to split time with The Drake.  Jacquizz Rodgers will now get consistent passing down work with the injury to Ronald Jones.  Ivory is a flex play in deep leagues. It looks like the Bills held onto LeSean McCoy at the deadline so he needs an injury for the bigger workloads to happen. Then gain, I could see McCoy missing some time. His motivation to play through pain cannot be very high right now.  Sproles’ value gets a bump as they failed to add an alpha back at the deadline.  If his hammy heals up, he could play a role. That’s obviously for those in deep PPR formats. Mike Davis could help you get through a bye week, but this looks like Carson’s show now.  Foreman is a guy to stash in case he shows up healthy this week or next.  He’s worth a look if you have some bench space to play with.

With Demaryius Thomas in Houston, Sutton is now my official choice for the top spot this week. Coutee drops down a few pegs with Thomas now playing the number role in Houston, but don’t forget that he wasn’t killing it in Denver. There could still be an opportunity increase for Keke in the wake of Fuller’s injury.  Moore has been on my stash list all year and I think he’s now entered weekly flex territory with room to grow. He played a season high 46 snaps in Week 8 and piled up 136 total yards on the day. Anderson is the Jets top weapon and should return from his ankle injury this week. Westbrook is on the bye so be mindful of that, but he has stepped up this year and is the most dependable weapon in Jacksonville. Smith has played over 70 percent of the snaps in consecutive weeks so he’s locked in as a starter. His production will have spikes and lulls, but he’s a startable flex in 12-team leagues. Amendola is locked into a nice role in the slot, but his health is always a concern so don’t overpay. Chris Conley’s inclusion is all about Tyreek Hill’s groin injury. If Hill cannot go this week, Conley becomes a high upside WR3 option. He’s a very smart pickup if you rely on Hill.

TJ Jones should get a solid increase in snaps and targets with Golden tate’s departure, but the tight ends and backs would also see some ofthat action, so don’t value him too highly. He’s probably worth a little bit more than a guy like Adam Humphries.  Pryor is now a Bill, so taht could be a nice fit when Josh Allen gets back. The skill sets line up well.  He’s for deep leaguers only.  DaeSean Hamilton could get some run as the new third receiver in Denver, with Demaryius now in Houston. Tim Patrick as another candidate worth looking at in super deep formats.

Doyle’s been my guy for over a month. He finally returned in Week 8 and posted big digits. The Colts are on the bye this week, but find a way to roster Doyle if you can, especially in full PPR leagues. McDonald continues to make plays and is certainly a viable option during the byes and perhaps beyond. He only played 38 percent of the snaps in Week 8, which is a mild concern. Hurst played 30 snaps last week—a season high, and posted 29 yards and a score. I see this as just the beginning for the talented rookie. Get him now if you have a need at tight end. He’s playable this week. Herndon finally played major snaps (50 percent) and he found the end zone for the third consecutive week. I’d add him now in deeper leagues as he could be in for a playing time boost.

Roberts gets a bump in the wake of Golden Tate’s departure.  He’s a red zone threat and he could have some value in seasonal leagues if he gets more snaps betwen the twenties.  Jordan Thomas has shown some TD potential and is worth a stash in deep formats, just to see if he’s opened up some playing time for himself. We’ll know more once Ryan Griffin is healthy, which should be this week.  Thomas played 89 percent of the snaps with Griffin out, and scored twice.