Once again, I thank you all for the continued patience and support. This is the last week where my schedule is crazy. I will be back in the proverbial saddle for Week 6, and I honestly cannot wait.

Tonight’s wire was written in a single pass and posted because time is of the essence. If you want a wire with fewer typos, check back around 10pm, I’ll have run a comb through it by then. This is the kind of editorial honesty you only get at Rotobahn, by the way. Yeah, there are probably some good reasons for that.

I will be back tomorrow and again on Thursday with The Rotobahn, which have plenty of thoughts from last week’s games. I’m about halfway through at this point, and would have a lot more done if the NFL could create a decent app for its Game Pass product. Sadly they suck at it, and that’s putting it mildly. At some point I am going to rant on the pod about this, but time is short right now.

I started late today, so I may have a few more players added by around 10pm.

Williams is for short term punch at running back. Shenault, Gainwell, Mooney and Samuel are the guys who really catch my eye for long term value. Ride McKissic while you can in PPR leagues. In deeper leagues, he’s a nice guy to move while the value is up.

Lance and Fields are the potential game-changers, but if you need Week 5 help, Fields is not much of an option. Lance is risky (play-wise but also Garoppolo’s availability), but he clearly has the go ahead to use his wheels, while Matt Nagy seems to have installed a governor on Fields. Both are great upside stashes. One note on Lance’s Week 4 output. It looked A LOT better on paper. Lance looked out of synch and at times confused. His release point was inconsistent and his throws were scattershot. Better can be expected with a week of starter’s reps, but his big half was hugely aided by Deebo Samuel making plays and Seattle completely blowing assignments. If two plays go differently, the numbers look not so great. Just a dose of truth. He’s still an exciting fantasy asset. The bottom line is that Jimmy Garoppolo has been a big part of the problem. Unless the 49ers feels hat playing Lance is going to hurt his development, their hands could be forced soon. If they force Jimmy to play this week with the calf injury, to me, that’s a sign they are concerned about Lance.

Darnold, Jones and Lawrence are the best adds for immediate usage plus rest of the season value. Both Jones (at Dallas) and Darnold (vs. Philly) have tasty Week 5 matchups.

As is often the case with the backs, it’s about the situations as much as the players. Williams projects to have 4-5 weeks of RB2 level production as the main replacement for David Montgomery, who has a knee injury. Gainwell is not likely to see the immediate surge in playing time that Williams will, but his value should be sustainable for the rest of the way. The deeper the format, the more I want Gainwell over Williams. The better my team is, the more I want the longer term guy, which is Gainwell. Of course, if what I need is punch right now, and I am 1-3 or a light 2-2 or, gulp, at 0-4 with one foot in the grave, I will opt for the plug-n-play value of Williams.

Right behind the top two is Carter, who like Gainwell, has longer term appeal and is gaining steam. The reasons I want Carter are multiple. I like his game and he’s showing well in the pass game too. He’s clearly a player they want to get going. Maybe the biggest thing is that the offense is looking more functional with Zach Wilson finding his footing.

Murray is not far off the pace though he is old and has other grumpy old dudes fighting for time in the same backfield. Murray has worked well as far as footwork and the meshpoint goes. I think he can maintain strong flex appeal and would certainly move into the RB2 discussion if he can gain a consistent 15 plus touch role with goal line love. It’s certainly possible and this team will get into a lot of those goal line situations.

Williams continues to look good out there and despite CEH’s recent revival, this backfield is still a moving picture. I’m not sold that CEH is completely out of the woods as far as role goes. It’s not a bad time to sell if you have a buyer willing to pay full price.

Brown is “leading” a three man backfield for a team that prefers to not use the backs much, or so it has seemed lately. He is the most likely back to get the touchdowns right now, so he has some appeal in deep formats if you are hurting. This backfield is a total mess for fantasy right now. The back who looks the most explosive is Salvon Ahmed, but he’s not getting enough action to consider outside of huge formats or dynasty leagues.

Perine will have value as the guy who should have the goal line if Joe Mixon misses time, but from the looks of things, he may not. Add Perine if you need Mixon’s stats, and, in insurance terms, you have partial coverage. Chris Evans will steal some work.

Collins’ arrow could be pointing up this week. He’s run pretty well and avoided his big bugaboo—fumbles. Now this. 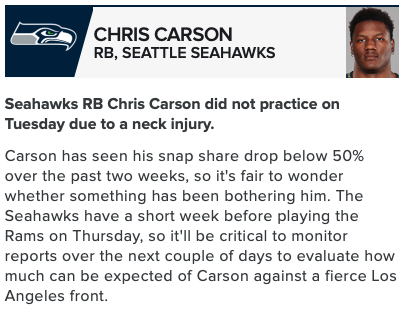 Herbert is a guy I like and he’s now one step closer to playing time. If Williams can’t go or gets dinged, Herbert could surprise some people.

Shenault’s role should continue to grow based on his own play but with DJ Chark gone for the year, the Jaguars need to start fast-tracking Laviska more than they have been doing. They may have had a different timetable in mind, but I think we will see a more diversified route tree going forward. More deep looks and hopefully more intermediate looks.

Samuel is a playmaker on a team that only has two. Yeah yeah, they have a few other guys, but Samuel has the kind of explosiveness we see from Antonio Gibson and Terry McLaurin. If they get all three going, it’ll be off to the races. I’d add him now versus waiting for him to pop, because when he pops, it will often make SportsCenter.

Mooney has breakout potential IF the Bears open things up a bit. Last week was a tough-to-maintain performance because he was targeted a lot with his team barely running any plays. I am adding him where I can for the long term potential as much as last week’s game upping this week’s projection.

Gallup has fallen under 50% rostership on Yahoo and he could be back soon, so he is a stash if you can get him.

I have them ranked for how I’d add them for Week 5. For the rest of the season, I still like Engram as a stash. He moves up to the two spot if you are just looking for upside. Brate is a play if Gronkowski remains out.