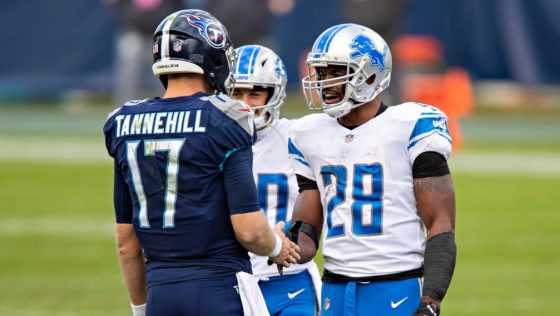 What can we even say at this point? The major injuries continue to mount as well as the Covid absences, and, when you throw in the bye weeks, it can be tough to field a good deep in deeper leagues. I’m having some issues in some of my 12-team leagues too, so I assume I’m not alone.

The Derrick Henry news is a tough beat because the teams with him were likely riding high and this is about as bad a gut punch as a good team gets.

There are eight teams on the bye over the next two weeks, so it’s a time to think about getting ahead of the curve if you can. It’s definitely not a time to carry dead wood on your bench.

Matt Nagy was on Covid leave and, go figure, Justin Fields went off a bit. Things were implemented. Successes were had. While I sincerely hope that Nagy gets well, I also hope he is removed from Fields’ equation as soon as possible. He is, quite simply, in the way. As for rostering Fields, he has enough plus matchups the rest of the way to stash him. Beware of his Week 10 bye.

So, for me, it’s Taysom Hill (concussion), who could be back this week and then Fields, but only if a QB stash makes sense for your team. Tua’s next because, with the passing of the trade deadline, he now has the gig and his weapons are getting healthier. Mac Jones has looked good to me and his schedule is solid for fantasy purposes. He won’t lose his job, which is a plus.

Seriously, Adrian Peterson, the Micheal Myers of NFL RBs, is back, and his pulse is potentially strong if he can get his legs underneath him. This is a guy who looked solid as recently as last year. The big question is, will he have “fresh legs” or out-of-shape legs? He’s certainly a special athlete who cannot be discounted. The Titans have Jeremy McNichols and D’Onta Foreman as well, so this is still a live ball, but my money is on AP as well as my FAAB.

Derrick Gore has CEH coming back in a week or so, and there are other backs in the mix, obviously. That said, he looked good on his 11 carries and nobody has grabbed the gig with both hands yet. He’s a nice flex play in deep leagues and a nice stash in any league where you have some bench space to play with.

Jeff Wilson has been a good stash for a while now. I suspect he is still a week or two away but you never know. I’d add him if you can.

Toney made it through Week 8 and should have some big games coming if he can stay healthy.

Darnell Mooney seems to have become the favorite target of rookie QB Justin Fields. It’s a wave you can ride for now but you do have a bye next week.

The situation with Henry Rugs is awful but the guy who should see a role bump is Bryan Edwards. Hunter Renfrow is that much more locked into his target load and is an even better add if we are talking full PPR.

Bateman has more ceiling than we’ve seen so far though he has looked quite good while shaking the rust off. I’d add him now before the price goes up, and that could happen soon.

With the release of DeSean Jackson, Van Jefferson’s route running will be on full display the rest of the way. He’s a solid fit for the strong-armed Stafford and his weekly flex appeal (in leagues with 12 or more teams) should continue unabated.

Nico Collins looked healthy last week and he could be getting a QB upgrade soon.

Freiermuth is clearly the prize at the position. He’s blown past Eric Ebron and with JuJu Smith-Schuster out for the duration, the targets will continue to be there.

Arnold is next because he’s clearly the guy at TE in Jacksonville and they need places to throw the football. I also like the way Trevor Lawrence is throwing the ball. He could catch fire at some point.