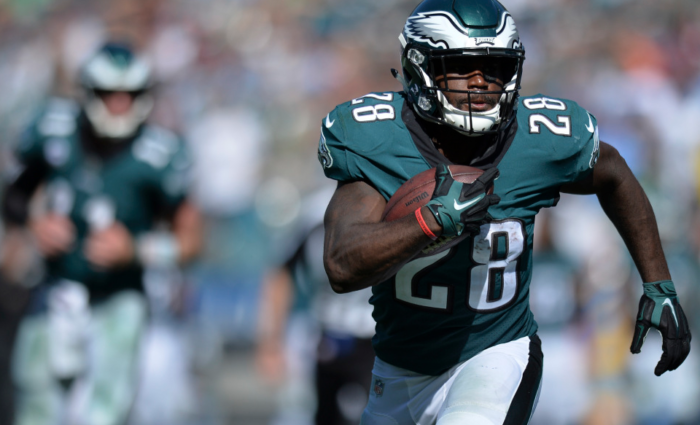 Week 10 is here and we have four teams on their bye weeks. That will lead to a competitive free agent market, so get your teams organized. Next week, we go back to six teams at rest, so if this week isn’t hitting you all that hard, you should try and look ahead to Week 11 and get the jump on your competition.

This article will be updated throughout the afternoon and will be finalized by about 7 p.m.  Players added after this morning’s article are listed in bold.

Fitzpatrick started Week 9 off with an awful interception, and was not yanked as his team fell behind by multiple scores early. That’s a positive sign because they didn’t pull the quarterback as they have done a few times in 2018. It’s a sign that this job now belongs to the veteran. Mayfield looked good in his new post-Hue Jackson offense and has a playable schedule in the near term. Mullens played so well in relief of C.J. Beathard, that he’s been named starter for Week 10. Mariota had his best game of the year last night and he snapped off some throws that indicate his hand has fully healed. Alex Smith has a sweet matchup at Tampa this week. Prescott is a matchup play and he has five good ones left over the final seven fantasy weeks.

In a deep league or parhaps in a 2QB format if he’s available, I like the idea of adding Jackson. He could be a lights out fantasy force whether he’s winning games for the ravens or not. At some point, this team will look to the future. Jackson could easily start games during the fantasy playoffs. Heck, for all we know, he could take over in Week 11. The Ravens are on their bye this week.

Josh Rosen’s first 300 yard game could be coming soon. While he’s struggled for various reasons, I like his schedule plenty over the next two weeks and I know a lot of us have bye related needs during that time. He visits KC this week and hosts the Raiders in Week 11.

Davis leads the list, but be careful because his value is tied to the health of Chris Carson, so make sure you follow injury information right up until you finalize your bids. Davis is a solid RB2 if he starts, but he’s a light flex if Carson is good to go. Smallwood was dumped on his bye by folks who assumed the Eagles would deal for a RB. They did not, thus Smallwood is the best bet for points going forward. He’s a strong weekly flex who can be used as a RB2 unless something changes. McGuire will be in the role left behind by Bilal Powell who is on IR. The value of the role is enhanced in that Isiah Crowell (foot) is playing at less than 100 percent. McGuire should see steady usage in passing situations and as a change of pace. Duke Johnson finally saw the kind of usage commensurate with his talents. He should stay more involved going forward and now has flex appeal in PPR formats. Riddick returned with a bang and in somewhat surprising fashion—playing some slot receiver and sharing the field with Kerryon Johnson at times. It’s clear that Riddick—a player they’ve always loved, will be part of the plan to replace Golden Tate’s interior presence and now has increased PPR appeal. Josh Adams looked like his role was growing back in Week 8, but he’s faded from memory after his bye week. He has a shot at goal line work if his strong play continues. He’s well worth a look in large formats. Ito Smith has weekly flex value and is now past his bye and the same goes for Nyheim Hines. Ty Montgomery was not part of last week’s brutal loss to the Steelers. That’s a good thing for him. I’d be surprised if he doesn’t get a good look this week or next. He’s a great stash in large formats and a player to watch in all leagues. Jamaal Williams is a decent flex in deep formats and is now a great handcuff option for those who are leaning on Aaron Jones. Bibbs will have some PPR value if Chris Thompson misses more time.

Abdullah just got released and he could end up in a bunch of places. The important thing is that it would be hard for him to land in a place where he’d have less value than where he’s been. He’s a nice add in deep leagues with big rosters and a solid add in dynasty if he’s a free agent. Sproles is for deep PPR leaguers only. Morris has new life in the wake of Mostert’s season-ending injury. Foreman is a pure stash, but he has some ceiling to him. You should know more on him in the next week or so.

The receivers are a tough bunch this week with no clear cut great targets to go after. It makes sense since we’ve been shaking this tree for weeks. Valdes-Scantling has looked very good and I’d think he’s earned a job as the number two option behind DaVante Adams, but you never know. Geronimo Allison could get healthy and reclaim his job for all we know. Still, MVS is my top choice this week due to his big ceiling which is obviously a lot about Aaron Rodgers.

***UPDATE***   Geronimo Allison is now on IR, so MVS is an even higher priority if you can go get him tonight.

Tre’Quan Smith is looking like he’s the number two receiver for Drew Brees, which is valuable in and of itself, but he’s shown legit playmaking chops. He’s a WR3 going forward unless there’s a sea change on the depth chart. Ross is so high because A.J. Green’s toe injury will require some missed games. That makes Ross the team’s primary downfield weapon with Tyler Boyd dominating targets and interior routes. The two Williams (Tyrell and Mike), both have flex/WR3 appeal going forward thanks to Phillip Rivers and a favorable schedule. Anderson and Enunwa both came back healthy in Week 10 and can be counted on for flex value going forward. The Jets tough remaining schedule should keep them south of the WR3 level. Coutee should have appeal going forward as a potential slot machine but beware of his Week 10 bye. Maurice Harris is filling the target void in Washington, and with Paul Richardson’s (pour one out for our guy) season-ending knee injury, he could have value the rest of the way in PPR formats.

Agholor was a late add because I did not notice how low owned he’s become.  The Eagles offense is about to take off. There will be a lot of big plays coming soon and Agholor will get his share. Expect the kind of performances he had in 2017. He’s a solid WR3/flex. His efficiency is about to spike as he gets better matchups and the offense gets momentum. Higgins is a nice add in deep leagues. He should be healthier this week.

Doyle is the no-brainer add if you can get him. He’s Andrew Luck’s binky and a weekly top 8 option in PPR leagues. Heuerman, a fixture in this space the last few weeks, has finally turned his involvement into points. With Demaryius Thomas gone, he should continue to have a role. Herndon is filling the interior void for the Jets and has been their top weapon in the red zone. Uzomah is the guy at tight end in Cincinnati, and with A.J. Green out, he should see more love in the red zone. Watson is a desperation play with some touchdown potential.

Jonnu Smith made a big play last week and he’s playing a full time role. He just needs more opportunities and I think we’ll see a substantial increase going forward. He’s a risky play right now, so he’s more of a stash option. The two Jaguars are fighting it out and splitting time, but if either one earns a full time share, he could have some value in 14 and 16 team leagues.  Blake Bell is the guy who intrigues me, because he’s a playmaker who’s been learning the position since 2014, his last season at Oklahoma. Bell started out as a quarterback and was Landry Jones’ backup. If you look at a typical tight end learning curve, Bell is actually entering his window now. He just turned 27 in August. In deep tight end premuim leagues, he’s definitely worth a look. I have him rostered in a few leagues.

Logan Thomas, another ex-QB, stepped up with 7 catches for 40 yards after Charles Clay left the game. It sounds like Clay could miss a week or more with a hamstring injury.