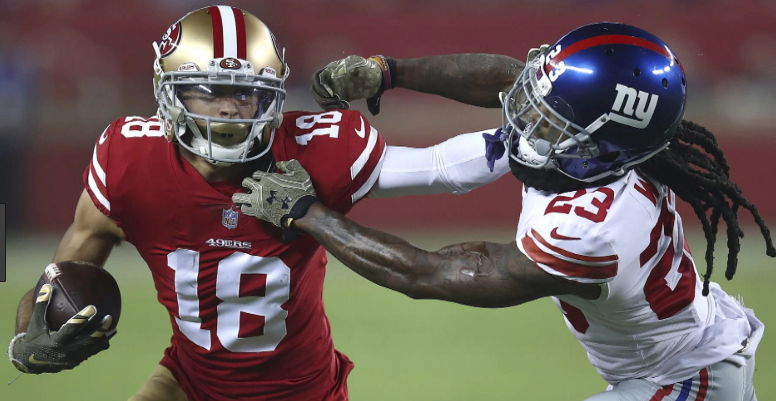 Welcome to Week Fifteen! So you made the final four. Congratulations. Let’s roll up our sleeves and see if we can find the best assets to trim off of the waiver wire. Remember, any player with a big ceiling that you leave unclaimed is a player your opponent can use to beat you. So be proactive, even if you love your starting lineup this week.

It’s also worth thinking ahead. Look at the teams you might play next week. What are their weaknesses? If you see some good matchups for Week 16, you can add them now, preemptively.  Antonio Callaway has a home matchup with the Bengals in Week 16, for example. Keke Coutee gets a crack at the Eagles secondary next week, if he gets healthy … and he could easily play this week. You can make moves like this if your league has enough bench space.

Feel free to hit me up on Twitter tonight if you have questons that this article fails to address. I should be online until at least 9pm EST. After that, no promises.

The final version of this article will; be posted at 7pm.

You can listen to the Week 15 Waiver Wire Pod right here.

New additions for the afternoon wire are listed in bold.

Mayfield has a throw-to-win matchup on the road at Denver and his overall game is coming together these days. With Chris Harris, Jr. out, the Broncos have no standout defenders in their secondary. Prescott isn’t all that great but he’s now surrounded by playmakers and with the added foot-points you get, he’s become a solid floor play. His matchup at Indianapolis is a good one. Jackson gets yet another strong matchup at home versus the Bucs. Allen ran all over the Jets and clearly has a boom or bust fantasy profile. There’s plenty of room for big plays this week against Matt Patricia’s inconsistent Lions defense. Carr has been better than you might think in recent weeks and has a sweet road matchup with the Bengals. He’s playable if you need him. Mariota is also playable if not desirable. His injured arm has led to a wildly inconsistent season, but he’s looked better of late.  Keenum is playable at home vs. the Browns.

Derrick Henry, who is available in 40 percent of Yahoo leagues, is an obvious add if you can get him. Jackson has a solid matchup with the Chiefs on Thursday. There’s a strong chance that both Austin Ekeler and Melvin Gordon will be unavailable. If that is the case, Jackson becomes a strong RB2 for semifinal week. For Gordon owners, Jackson is a great pickup. Williams has flex appeal this week, but if Spencer Ware (hamstring/shoulder) is not available, he becomes a strong RB2 with RB1 upside. McGuire is looking like a good bet to lead the Jets backfield in Week 15, but if Isaiah Crowell (foot) heals quickly, he might be more of a flex play. The Raiders backs are not sexy or fun, but in standard scoring Martin is a viable 12-team league flex and Richard is the same in PPR scoring. This week’s projected game flow (Raiders at Bengals)  favors Martin. Dixon has been gaining momentum since his Week 13 activation. He’s flexworthy in 12-team leagues and has some potential to gain more share of the Ravens’ backfield. Penny looked strong again last night and would be in for a major workload if anything happened to Chris Carson. Zenner, a longtime Rotobahn favorite, could be worth a look this week. He’s a good pickup if you are a Kerryon Johnson team. If Johnson fails to play again in Week 15, Zenner would appear to have flex value. Zenner was more effective than LeGarrette Blount last week and is a far superior receiver. LeSean McCoy has a sore hamstring and is questionable for Week 15. In deep leagues, both Ivory and Murphy are potential pickups. Ivory is first in line for work, but he is listed as day-to-day with a shoulder injury himself. This may be a situation to monitor this week rather than one to act on tonight.

Ridley is a guy to if John Conner can’t get on the field this week. Ito Smith is a flex play with some big play ability. The Falcons seem ready to let Tevin Coleman hit the free agent market, and they probably want to get a good look at Smith before finalizing that notion. Sproles and Scott both have deep flex appeal due to the upside in Philly’s offense if they start clicking. Scott just got signed off of the Saints practice squad and is very explsoive. Stash him just in case he blows up. West is a deep add with Ware a little banged up.

Pettis should remain heavily involved now that Pierre Garcon (knee) has been placed on IR. Pettis has been the 49ers primary wide receiver over the last three weeks and is now fully healthy. He can be used as a WR3 going forward. Samuel has been reliable in recent weeks and with his team playing for its life, I doubt they will go away from him as a source of big plays. Westbrook is the receiver who seems to have meshed best with Cody Kessler and it makes sense given the interior routes he generally runs. Westbrook has some WR3 appeal in PPR leagues when the Jaguars host Washington this week. Still’s targets have risen steadily with Ryan Tannehill back and he looked great last week versus the Patriots. Stills should be a low-end WR3 option this week when the Dolphins travel to Minnesota. His matchup next week versus Jacksonville is even less appealing, but he’s the main guy now so at least he’ll be involved. Reynolds, like the rest of the Rams, have been a bit of a letdown in recent weeks. That should change this week when they host a very beatable Eagles secondary. Reynolds has appeal in 12-team leagues. Jordy Nelson is entirely unexciting but he’ll see the ball this week as one of the few viable receivers left standing in Oakland. Hamilton, a rookie, has stepped into the inside role vacated by Emmanuel Sanders (achilles) and he should carry WR3 value in PPR leagues over the next two weeks. Sutton and Patrick are also viable but are more dependent on making big plays. They have flex appeal in deeper formats that use standard scoring. All of the Broncos receivers have strong remaining matchups—facing the Browns this week and traveling to Oakland in Week 16. Forster has been making big plays and getting consistent opportunities to do so. He’s getting John Brown (first half of the season) type usage lately and he could help you as a flex play in a deep format. Zay Jones struggled last week, but has similar appeal due to the way the Bills get the ball deep downfield. Conley has WR3 value if Tyreek Hill (heel) can’t play this week. He’s a good way to protect yourself if you rely on Hill. Callaway had a tough matchup last week but has a shot to make some big plays this week in Denver. Taywan Taylor is a solid flex option in deeper formats. He’s been more involved the last two weeks now that he’s healthy. He also gets a solid matchup this week at the Giants.

Thomas has settled in quickly as the lead guy in the wake of Greg Olsen’s season-ending foot injury. He’s a solid talent and he’s getting steady targets. He has plenty of touchdown potential as well. He can start for you the rest of the way. I’ve been telling you about Thomas all year. Well, it’s finally happening. Davis will, most likely, be the starter the rest of the way for Washington now that Jordan Reed is looking out for the the season with a toe injury. Chris Herndon is getting the lion’s share of the playing time at tight end for the Jets and has a strong matchup this week when the Jets host the Texans. Speaking of strong matchups, Uzomah gets a shot at the Raiders this week. He can help you if you are in a jam. Oakland is highly charitable when it comes to defending opposing tight ends.

Goedert is a nice deep desperation play who is available in almost all redraft leagues. As we saw last week, he gets chances to make big plays and has the athletic profile to make it happen.