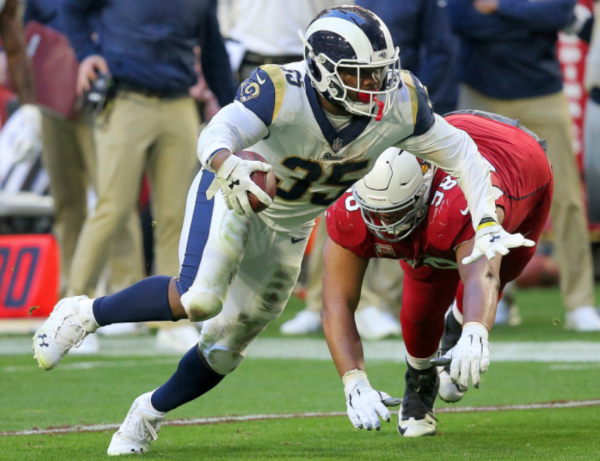 Merry Christmas to all!

I feel for the people reading this article. No, really. Your commissioner’s decision to have your league’s most important game on the NFL’s least predictable week has left you grasping at some harsh realities.

Will Zeke Elliott play? Will Drew Brees play?  Will any of the Saints important players play? These are not the questions we should be asking in advance of our bowl games. Still, every year, there are leagues using Week 17 to decide who the champion is. It’s nuts. And, this year, it’s even interrupting Christmas day. So have a talk with Commissioner Scrooge and get his or her act together for 2019.

All that being said, it’s your biggest week of the season, and I didn’t stay up late writing on Christmas Eve just to let you down with some lazy half-baked advice. I’ve done my due diligence. In the words of Benjamin Braddock, “it’s completely baked.”

The first thing I want you to do is get your head in Week 17 mode. Just think about last week. Championships can be decided by players who come out of nowhere. Consider guys like Jaylen Samuels, Damien Williams, Jeff Wilson and now C.J. Anderson, and the impact they have made in most leagues. These players, among others, have changed the trajectory of the 2018 fantasy season, and will continue to do so in Week 17. This is why you need to keep your head on a swivel rather than resting on your laurels.

You are probably a really strong team, but you should still make sure you pluck the best player possible off the waiver wire. Even if that player won’t increase your team’s score, it keeps your opponent from using the player against you. It’s a zero sum game at this stage and proactivity is your friend. So put in the time this week and pay attention. Remember, as the playoffs progress and teams drop out, fewer players are scooped off the wire. This can lead to a strong pool of available talent by the time we get to Week 17. At the bare minimum, make sure you take a look at what’s available and at what your opponent may need this week. If you have the edge in waiver priority or in FAAB budget, you should make sure you scoop up any potentially game-changing talent. So drain your budget, because you can’t take it with you.

Now that I’ve gotten your attention, allow me to congratulate you on a successful season. There’s nothing better than playing for all the marbles. Now let’s get to work and maximize our odds of taking home the hardware.

Foles is on fire again and he’s a solid pickup for his matchup at Washington on Sunday. Darnold is on a bit of a tear and he can help you if you are in need. The Jets are a weak offense on the whole, but Darnold’s aggression gives him a high ceiling when the Jets travel up to New England this weekend. The Bills face a Miami team that misses tackles on a regular basis. His ability to score points with his feet is a big asset in this game. If you need a QB with a big ceiling, he’s definitely an option. Carr travels to Kansas City to play a Chiefs team that could be resting players. It’s a good spot for Carr, who has been playing well lately. Bridgewater is a strong bet to start in place of Drew Brees. If you’ve been riding Brees, then Teddy is a good way to cover your posterior.

Anderson is the obvious move this week, and he underscores the importance of being proactive. You may have a backfield with Zeke Elliott, Nick Chubb and Saquon Barkley, but you’d still be well served to keep Anderson away from your opponent if you can. Wilson should be the main back for the 49ers with Matt Breida nursing a sprained ankle. Wilson’s workload could be large in this spot, so he’s a potential league-changer. Rod Smith is a good bet to lead the Dallas backfield even if Zeke Elliott gets a few token touches. Smith’s skillset works well in all scoring formats. Freeman could be huge this week if Phillip Lindsay’s hand injury causes him to miss Week 17. Freeman would be a big back with guaranteed volume, which is a nice thing to have on such a crazy week. He’s a must-add for Lindsay teams, but a wise add for all. Washington has a shot at being the main ball carrier if the Saints decide to rest Mark Ingram along with Alvin Kamara.  My guess is that Kamara sits while Ingram plays for a series or two—leaving Washington with a shot at 20 touches. He’s a power back with big play ability in the passing game, and a good speculative add. Hill is a potential starter this week depending on the status of Tevin Coleman’s injured groin. Hill is a great pickup if you have Coleman and a solid speculative add for anybody in need of RB help. I was a skeptic on Sproles’ fantasy value this year, but with all the injuries in Philadelphia, he is now getting legit snaps and touches. In fact, he played 46 percent of the offensive snaps in Week 16, which led the backfield. He’s scored touchdowns in two out of the last three weeks, and is a viable play this week in deeper formats.

Nelson is a very safe floor option. He’s been targeted 35 times over the last four games. He’s got WR1 upside if he can find the end zone. Foster had a tough matchup with the Patriots corners last week, but draws a much friendlier home matchup this week versus the Dolphins. Agholor has been playing major snaps and he’s always had a good rapport with Nick Foles. If you want a player with a weak floor but a very high ceiling, he’s a good WR3 to target this week. Hogan drew a tough matchup last week against the Bills, but he should fare much better against the Jets this week. Crowder is finally back to playing the full complement of snaps and is seeing regular targets. That makes him a deadly weapon when Washington hosts a battered and beleaguered Eagles secondary this weekend. Samuel has a matchup with the Saints but he should avoid their shadow corner, Marshon Lattimore, and that assumes that Lattimore even plays a full game. Samuel is a good fit for the Panther’s new dink and dunk style, with Cam Newton out. Bourne is a good shot to be the lead dog for the 49ers this week, with Dante Pettis, Pierre Garcon out and with Marquise Goodwin nursing a calf injury. The two Broncos receivers are good bets for targets this week. Hamilton is the better PPR play but Sutton has more upside in standard scoring. Zay Jones got back on track last week and has flex appeal this week versus the Dolphins. Coutee could return this week and with Demaryius Thomas now on IR, he’ll have a big role if he does.

Herndon has been getting better and better. He’s basically the Jets number two receiver at this point. Herndon had a strong game against the Patriots back in Week 12, with 7 receptions for 57 yards and he’s more involved now. Uzomah is getting major targets due to all the missing pieces in the Bengals offense. He scored last week. Ian Thomas is one of my favorite rookies and he had a strong game last week. He’s viable for sure, but his matchup with the TE-killing Saints makes him a bit less appealing.