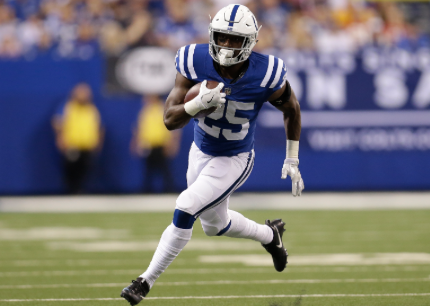 Welcome to Week 8!  With four teams on the bye, the free agent marketplace is going to be competitive. Hopefully you’ve been stocking up in recent weeks, because our stash plays have been hitting all over the place. If not, you can hopefully strike tonight and get your squad in good position for all of the upcoming byes.

Look for the waiver wire podcast later today with my partner in crime and dead references, Jim Hackett. This week’s pod will be posted over at WEEI. I’ll put up a link on Twitter as soon as it’s available.

My handle is @Rotobahn for those who don’t know.

I’ll be adding more names thoughout the day for those of you in deeper formats.  Late additions will be in bold. The expanded wire will be finalized around 8pm tonight.  For those of you up late, I’ll be stting in on the Open Bar tonight at about 9pm.  I’ll link to the show on Twitter.

The Week 8 bye teams are the Falcons, Cowboys, Titans & Chargers.

Alright, let’s get to the Week 8 targets.

Trubisky is about to become widely owned. He’s at about 50% on most major sites, so if you want him, get him now. Chicago’s scheme is working well for him—simplifying reads and getting the ball to the playmakers. Mayfield’s not the beneficiary of a great scheme or great surrounding talent, but he’s a good player who has a favorable schedule over the next two weeks. Flacco lacks the weapons to be a lights out fantasy force, but he’s throwing enough to be viable in most situations, including this week’s road matchup with the Panthers and next week’s home tilt against the Steelers. Keenum is hugely inconsistent, but he has great talent to throw to and has a nice matchup at Kansas City this week. Prescott just got a lot more interesting with a favorable playoff schedule and a new number one weapon in Amari Cooper. He’s on his bye this week, but the Cooper deal gives him renewed viability as does the recent emergence of Michael Gallup. Smith is unexciting to be sure, but he sports a playable schedule right up until he faces the Jaguars Week 15.

Mack is about to become universally unavailable, so hopefully you listened to me last week when I told you to ignore Ito Smith in favor of Mack and Nick Chubb. The news on Chubb’s ascent broke midweek, so he’s not a target in 82 percent of leagues but it’s worth your time to confirm his status in your league, just to be sure. As I have been saying all year, he’s a potential league-winner. The good news is that, even if Mack and Chubb are gone, Martin has some nice potential too. With Marshawn Lynch out of commission for the next two months, at minimum, the Raiders backfield is wide open. This should mean that Jalen Richard gets some more love as well, but I suspect he’ll remain in a passing down role for the most part. Smallwood did little in Week 7, but he did play ahead of Corey Clement again, so he needs to be rostered everywhere and you could win big if the Eagles fail to make a score before next week’s trading deadline. Jones is still a stash play. He’s playing a bit more but the Bucs are still using three backs and Peyton Barber is running a lot better than the stats suggest. Still, Jones has top shelf explosive traits and if this offense clicks, he should be a viable flex option. Ivory’s value is tied to the Week 8 availability of LeSean McCoy, who could be in the concussion protocol. Similarly, Mostert could have flex appeal in Week 8 if Matt Breida’s sprained ankle keeps him out. Hines will lose some luster in the wake of Mack’s huge day, but the better the offense moves the ball, the better it is for a space back like Hines. He’s got flex appeal in large formats.

Duke Johnson has been a disappointment but is  now in a two-man backfield on a team with what ought to be an improving offense.  Henry is a guy with a secure role who could end up having value if Tennessee gets itself straightened out.  He’s a reach as a flex option right now, but things can change fast.  Blount has flex appeal in stadard leagues for now because he sores touchdowns. He could be phased out at the goal line any time.  Morris could have some value this week  if Breida (ankle) can’t go.  Sproles could have some PPR appeal in deeper formats IF the Eagles stand pat at the deadline. He;s worth rostering for a week in deep leagues just in case.   Davis and Penny both have a chance to earn a sizable role in the Seahawks offense.  Penny has more upside as a first round pick, but Davis has more short term value.  If I had a shot at either one, I’d go Penny.  Foreman is an upside stash who appears to be a week or more away.  Certainly worth a roster sport in large formats with substantial bench space.

Godwin is the prize by my math, because we finally saw the Bucs moving him around the formation more and taking some snaps from Adam Humphries. Godwin is underrated in my view, both as a player and as a fantasy asset. No way I pass him up in a PPR league. Allison should be back at 100 percent soon and I have him as Aaron Rodger’s number two receiver. What else do we need to know? Smith’s role appears to resemble the one left behind by the recently injured Ted Ginn, and it’s effectively the number two role on the New Orleans offense. So, as with Allison, the rationale for rostering him is pretty easy to understand. Anderson will see a lot of number one corners, but Sam Darnold has shown consistent aggression targeting his outside receivers. So, while there will be some inconsistency, Anderson will be a weekly high upside WR3 option. I like Kirk’s role in the Cardinals’ offense based on what we’ve seen since Josh Rosen took over. If they can take the next step, Kirk could become a solid weekly starter in all but the smallest of PPR leagues. Tyrell Williams and Sanu are similar in that they can disappear at any time, but also have significant roles in good offenses. Only 27 receivers have more points than Williams in standard scoring, but beware that he’s on his bye this week. Sutton’s value could explode if Demaryius Thomas is dealt as rumors suggest he could be. Sutton has flex appeal even if Thomas stays. Grant could become a weekly staple for the Dolphins with Albert Wilson injured. Roster him now in big formats. Wilson’s injury also makes Amendola’s workload more secure. His value is up as well, particularly in PPR scoring. Both Moore and Miller are stash options versus strong Week 8 plays, but I’ve been on them all year based on their talent, and I’m sticking with them.

Higgins is not a lock to return this week but he should be back soon and I see him playing a significant role on the Browns offense when he gets back.  Coutee is now a stash because he will miss Week 8 with a hamdstring injury and it sounds like it could be a multi-week situation. Still, he’s been good and is obviously part of what the Texans want to be their core offense.   Bryant could be a nice short term source of points, due to Amari Cooper’s departure, but his suspension could kick in at some point.  And, obviously, he’ll have to raise his level of play.  That’s no lock.

Dez will have to sign at some point soon if he wants to show teams he can still play.   Definitely worth a stash in deep leagues.  Taylor is a guy to hold just because of his talent.  He’s on the bye this week.   Reynolds is a player to add if you need a replacement for Cooper Kupp.

McDonald is back off the bye and has carved out a role for himself, so he can be used as a weekly starter in most leagues. Doyle is a lock starter when healthy, especially in PPR leagues, but there’s really no indication as to when he will finally make his return. It could be in a few days or a few weeks. Value him based on your situation and roster restrictions. Uzomah is clearly locked into the lead role for the Bengals. He’s played over 90 percent of the snaps for three consecutive weeks. He’s been effective enough to use a solid TE2. Watson is getting just enough time and attention for use in deep formats. Herndon is an ascending catch-first weapon for the Jets, but will be inconsistent. He’s for deep leagues and bye week considerations. Hurst has been disappointing so far but once they scale his snaps up a bit, he should start to produce. He’s a stash option in large formats.

Goedert is always worth a desperation stream because he has a red zone role.  Swaim is dinged up with an MCL strain, and could miss more than just the bye.  Still worthy of a roster spot in deep formats.  Dickson could earn a role in Seattle and is worth a deep flier if you need some bye week depth.  Heuerman plays plenty of snaps and is streamable in deep leagues.  Gates is what he is.  He’ll rake up a TD every now and then.  Jonnu Smith is a stash who could start making plays at some point.  He’s an explosive athlete.

Roberts is a late addition.  Reality says that he’s not worth much until he gets real playing time (30% snap rate in Week 7), but he’s the only tight end in Detroit who’s made any kind of impact.   The guy’s scored three times on four targets and 40 snaps this season–including a pair of scores in Week 7.  He’s healthy now after missing four weeks and maybe he’s worth a stash in some super deep leagues, just in case he sees a snap increase.